Recently I experimented with some chocolate shard cookies* made with Seattle’s Theo Chocolate bars and froze some of the dough for further experimentation. Last night I made doughs and completed preparations to bake some newbies this morning and deliver up some sweetness and love to my daughter in her office later today. Some people have a biochemical need to up their carb intake when recovering from shock and there was indeed a big shock to many this week. Who needs some sugar?

Several weeks ago, in a moment of intense chocolate craving while at the grocery store, I popped into their bakery looking for a brownie. Even a commercial brownie will sometimes do the trick, but they were sold out. The chap behind the counter told me that he had a sample of a “Brookie” which might do in a pinch since it had brownie as the main feature, but with some partially-baked chocolate chip cookie dough on the top. It suited for the moment, but as bakers will attest, once a new cookie is introduced to our palates, we will attempt something like it sooner or later.

An online search returned results indicating that the commercial bakery was not the first with the idea or the name. In this case, I don’t want to use the same name for the cookie I’ve made. Mine is going to be dedicated to the villain of some children’s stories I’m writing which will feature Lady Lolita Vandenbug, the cute green ladybug seen in many of MsChef’s photos. The natural enemy of ladybugs is the bird, and Lolita has a bird frenemy named Crook McBirdie (who may have offered input on the cookie’s name after discovering the Crookie is a brownie topped with Chocolate Shard Cookie dough icing, some of her favorite things.)

The second experiment, Chip Snicks, are vanilla snickerdoodles with Chocolate Shard Cookie Dough accents. Who says one cannot put a square peg of dough into a round hole in some other dough? They’re pretty cute.

And finally, because there was some vanilla snickerdoodle dough left after I’d used up all the frozen Chocolate Shard dough, I rolled the remaining dough balls in a special cinnamon coating. They definitely are Cinnamon Toast Snicks.

And from a spot which my camera loves, some more brilliant fall colors in gardens. 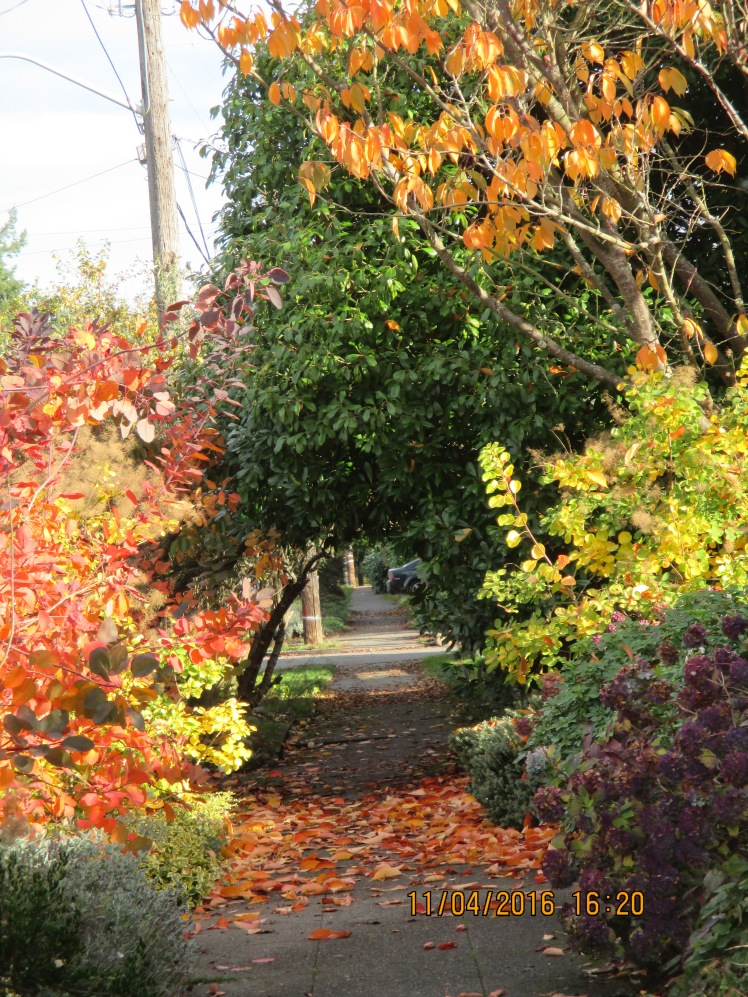 Update:  First cookie decision for the Christmas bake has been made. No voting, either. It was a unilateral decision. The Crookie will be this year’s featured chocolate cookie in the goodie tins. Yippee!