Just so happened that I had an appropriate ribbon for a tin with five types of my cookies inside on their merry way to somebody with a birthday tomorrow. I had no clue — when I baked a fresh batch this morning of Chewy Walnut & Fruit Bars and four Ginger Snicks with Molasses Caramel Accents to put in that tin along with a few of the Chocolate, Lime and Rum-Raisin Joneses made and frozen last week — about the amazing and wonderful coincidence about to happen later in the day.

When I moved into this place just over three months ago, there were three cats left behind by a couple of the previous residents. Arrangements had been made for one to be adopted by some folks down the street, but he still visits daily. I agreed to take care of one that my daughter adopted. The other, pregnant and abandoned, went near feral, having her two kittens in a neighbor’s dark, dank and dirty garage and moving them when discovered, unfriendly towards and frightened of humans. Another neighbor called the Alley Cat Project and reported the mother cat and kittens as strays.

The mother cat and kittens were humanely trapped after the kittens were 6 weeks old, a process which I watched unfold and helped with in the end, though I found it gut-wrenching. The lady from the Alley Cat Project was wonderful and calm, having experience with feral cats who try to jump through windows to escape, as this one did when she couldn’t get out of the hallway and realized it. She did settle down and walked into the trap in which she was accustomed to finding food, and felt safer once the cage was covered with a towel. The kittens were put in foster care and soon to be adopted, the mother was spayed and returned to the area a few days later, minus one-third of an ear which is clipped so the city’s Animal Control people know that she’s spayed if she’s ever picked up as a stray again. Long story short: she has adopted me. Also, I promised the lady who helped that I’d make her some cookies for her husband’s birthday.

The other cat, a one-year old male, the one my daughter agreed to adopt, was attacked and injured by the neighborhood Dom Tom Cat about three weeks ago. I didn’t know what had happened to him, but had seen him being chased by the bully and come back a mess. I waited a day to take him to the vet, and when I did, I had to surrender him because I live on a limited income and could not afford his veterinary care which was going to include hospitalization for 10 days. The care gets provided, then the cat is sold to a new person. I was shattered, having become attached to him, bringing out his playful side, posting pictures and stories of him for my grandniece gone 1000 miles away, and having arranged for him to be neutered, get his shots, chip and license.

So today the lovely lady from the Alley Cat Project came over to collect the promised tin of cookies. I’d texted a reminder to her a few days ago and told her that I had both a happy story and a rotten one to tell her when she got here. First I told her about the mother cat welcoming herself to my home. She told me that she wonders what becomes of the alley cats that are trapped, neutered or spayed, clipped and returned to the area from which they are taken. In this case, the ending was a comfort.

Then I began telling her about the trip to the vet and my heart being ripped out. She stopped me as soon as I said his name and told me that she was the person fostering him! We had a lengthy discussion and it was decided that the very best place for him is — wait for it, those of you who know us — the very best place for him is with me, in the house and area where he’s grown up. He still has some recovering to do, but he is definitely as happy as I am. His mother, the other cat, is not so sure, but they will rekindle their relationship shortly. He got the hospital care he needed, a nurturing foster parent, and he is now returned to his own home. He has demonstrated very well how happy he is to be here.

Those cookies brought me back the cat I missed dreadfully. Imagine that. I couldn’t have.

Five kinds of cookies and two cats to love.

Here’s the big boy pining away for the great outdoors. 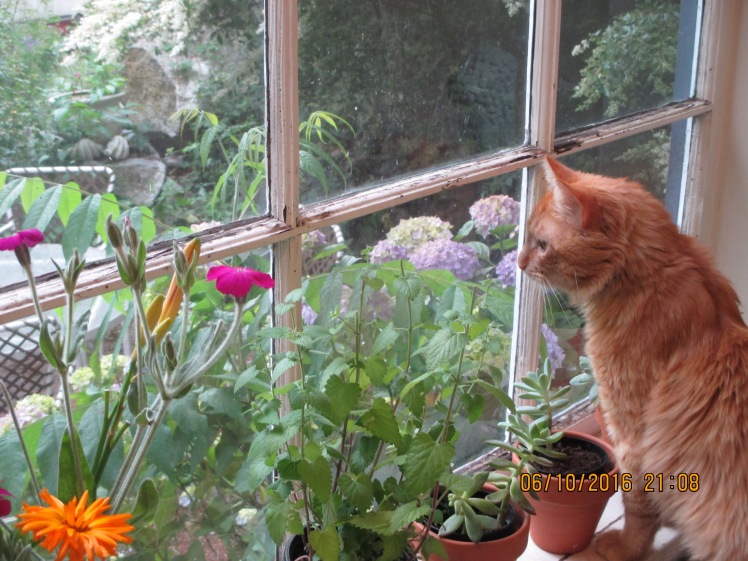