A couple weeks ago I was gifted with a delicious fat slice of perfectly crusty, chewy no-knead bread made by the sisters with whom I’ve reported as being “In the kitchen with juliyya” and “In the virtual kitchen with juliyya” multiple times. Their uncle had recently taught them virtually via Skype how to make this bread and after having a sample, I sent them a snail mail with a self-addressed stamped envelope and a recipe card and asked them to send me the recipe.

I received the recipe yesterday and the first thing that I noticed about it was that it had BEER in it and no sugar. What a surprise!

The second thing that I noticed was the word “shaggy” describing how the dough should look when it was first mixed. I’m an experienced bread baker, over 50 years of it, and had never heard that term in relation to bread, so did a quick search for Dutch oven no-knead beer bread. Every one of the recipe results said “shaggy” but one explained mixing the dry and wet ingredients with a fork so as not to overmix, which made sense breadwise. After all, some sourdough breads require two to three days in preparation because the mash sits at room temperature for a day after the starter has also expanded for a day while the yeast takes its time to partake of the sugar. The dough is shaggy.

I didn’t have a Dutch oven and all the recipes crucially called for either one of those or a deep cast iron pan with a cast iron lid. I have the pan, but no lid and tin foil won’t work for this bread. I also didn’t have beer or lager or stout or ale because I don’t drink or like them. However, I was determined to have a go at the recipe and impatient to boot.

I walked to the Target store where on online search told me there was a 6-quart cast iron, enamel-lined, candy apple red one available. Along the way, I asked a neighbor (who has my favorite fluffy-haired puppy) if she had any beer and would she share 1/4 cup with me for the bread and then keep the rest. Yes. I promised to share the result. And so it was that I carried 15 pounds of metal in a bag on my shoulder for 12 blocks and picked up the can of stout she didn’t want returned (which I gave to another neighbor.) I made the dough soon thereafter and covered it for a 20-hour slow first rise.

The bread itself was colored by the type of ale used. It’s scrumptious, chewy and spongy at the same time, and made some heavenly toast tonight, too. I shared half the loaf with the provider of stout, a quarter with a neighbor who only eats bread toasted and the other fourth for me. I want to make it again and again if only for the toast! Divine. 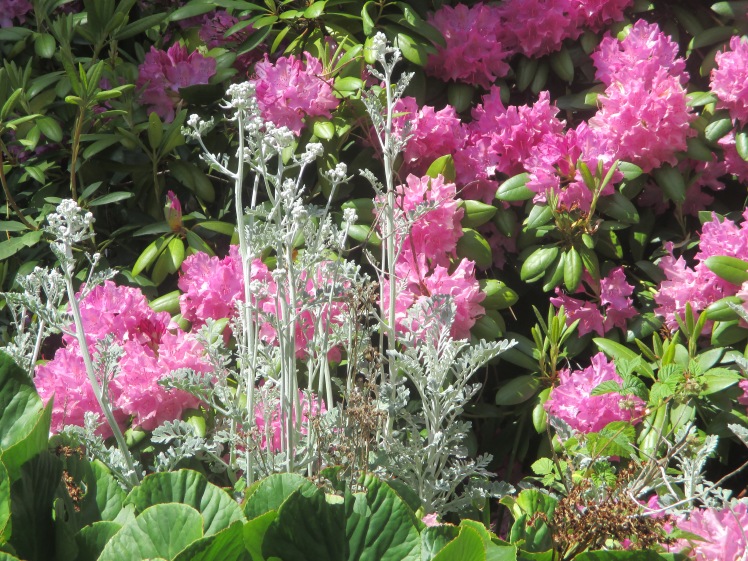 And now I have a Dutch oven after over 40 years without one, a gift for myself with much more bread and deliciousness to come.