I had to go to my local Trader Joe’s again today to pick up one of their dark Belgian chocolate Pound Plus bars because somebody had bought every one of them in stock when I went in store yesterday and there was another box due last night. (There was still plenty of the other four types that I don’t need for Sylvia’s German chocolate cake later this month when the rush is on. I prefer to miss the rush.) They held one for me, which is one of the things I appreciate about the store, their excellent customer service. 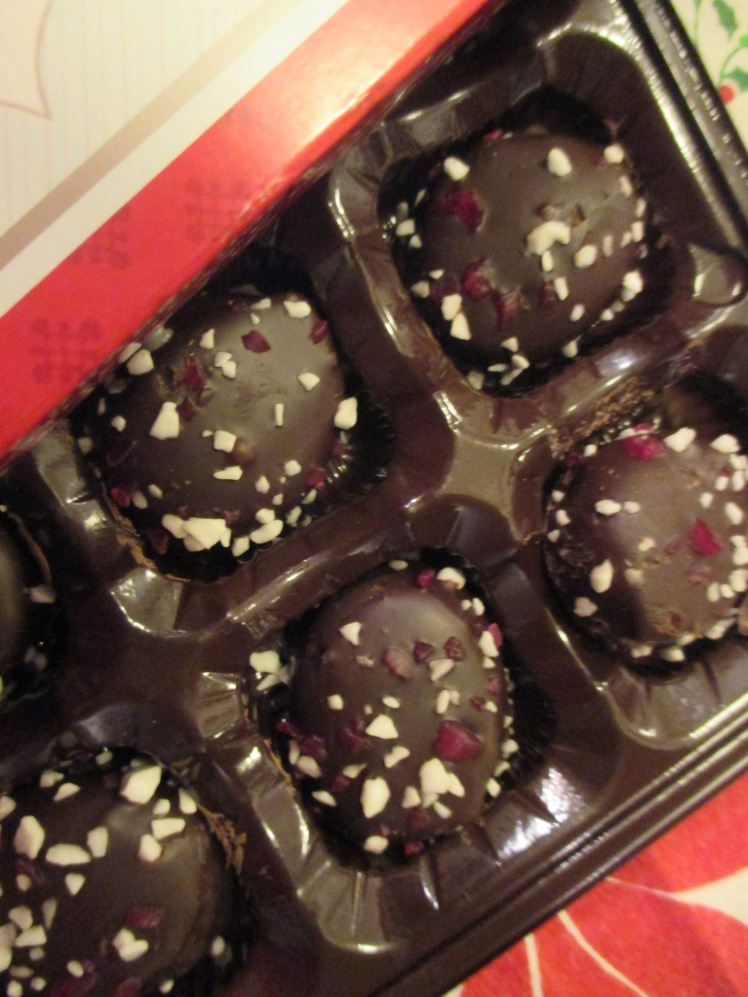 I put a few other items in the basket that I’d earmarked for today when I wouldn’t already be carrying heavy bags on each shoulder, and then the Genie of Chocolate and Peppermint made me look up and I saw these. I hoped that they would match the description on the box: soft, creamy and minty bites. Oh, but did they ever!

Let me offer an unpaid, unsolicited review. Short version is so obvious: perfect.

Longer version started with one of those slow head rolls and muffled moan that accompanies the collision of tongue and palate with a substance that we taste and find more than agreeable. The addition of mellowed candy cane pieces slows that collision down for even more enjoyment.

Not only that, but it satisfied my one and only complaint about Campfire Girls Mints, which is that they’re covered in milk chocolate. I think the creamy mint filling in the Trader Joe’s dark chocolate offering has the same texture and almost precisely the same moderate peppermint taste as that of our locally made offering for Campfire Girl Mints. Trader Joe’s label doesn’t name the candy manufacturer for these mints, but my palate says it’s my old favorite since childhood, Brown & Haley’s in Tacoma, especially since they make the milk chocolate version for the Campfire Girls. Gold stars for the candy maker and to Trader Joe’s for branding this peppermint treat with dark chocolate.

I had a couple as a sweet reward for completing the first pages for NaNoWriMo 2018. As I was leaving the apartment on my way to Trader Joe’s this morning, I saw this giant mushroom, probably 8″ across and couldn’t help myself, got out the camera and shot it. I must have had speckles on my mind when I saw the photo on the candy box.