I attempted a different kind of fudge tonight to take as a treat on Friday for my mother on Bainbridge Island. It doesn’t have chocolate or marshmallow creme in it, but has an atypical ingredient for American kitchens while being in every British and Canadian kitchen. I had to go to five large grocery stores this week before finding a can of imported golden syrup at the Ballard Market today. It’s the secret ingredient in this boiled Russian Fudge. 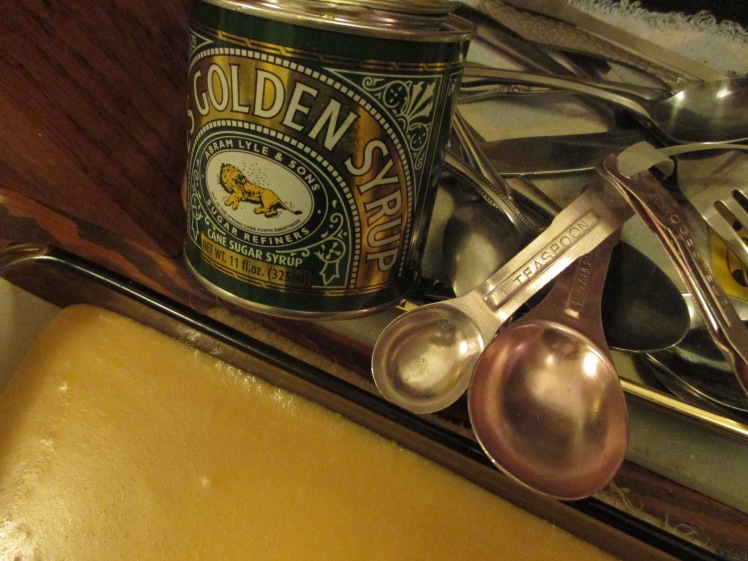 Failed. Large sugar crystals pretending to be fudge. 3 1/2 c. sugar, 1/2 c. milk, 125 g. butter, 200 g. sweetened condensed milk, 3 T. golden syrup and 1/2 t. salt stirred on low heat for an hour before it started to boil, then stirred for another 20 minutes to 234 degrees, the off, then 2 t. vanilla, then cool for awhile, then beat. Apparently the sugar never melted properly in the first stage, and even though I buttered the big pot in advance, kept the burner on low and scraped the sides of the pan, it’s a crystal mess.

I looked for Russian Fudge recipes and instructions that weren’t those I followed, found they were all pretty much the same: put everything in the pot excepting vanilla. They also all looked grainy, sugary, not at all like the creaminess which I associate with fudge. Tiny crystals is expected, but not a mouthful of put-it-in-my-coffee. A look at the science, belatedly, plus the normal techniques for boiled fudge, showed me the likely errors, but I’m too fed up to have another go tonight. When I do, I will use the familiar methods, skip the sweetened condensed milk for regular evaporated milk and adding the butter after the mixture gets to softball stage. Maybe next week.

Meanwhile, it does taste a bit like penuche, yet there was no brown sugar in it, so it will probably do to stir into my morning coffee while I bake a quick batch of some cookie to take with me tomorrow in lieu of the planned fudge.